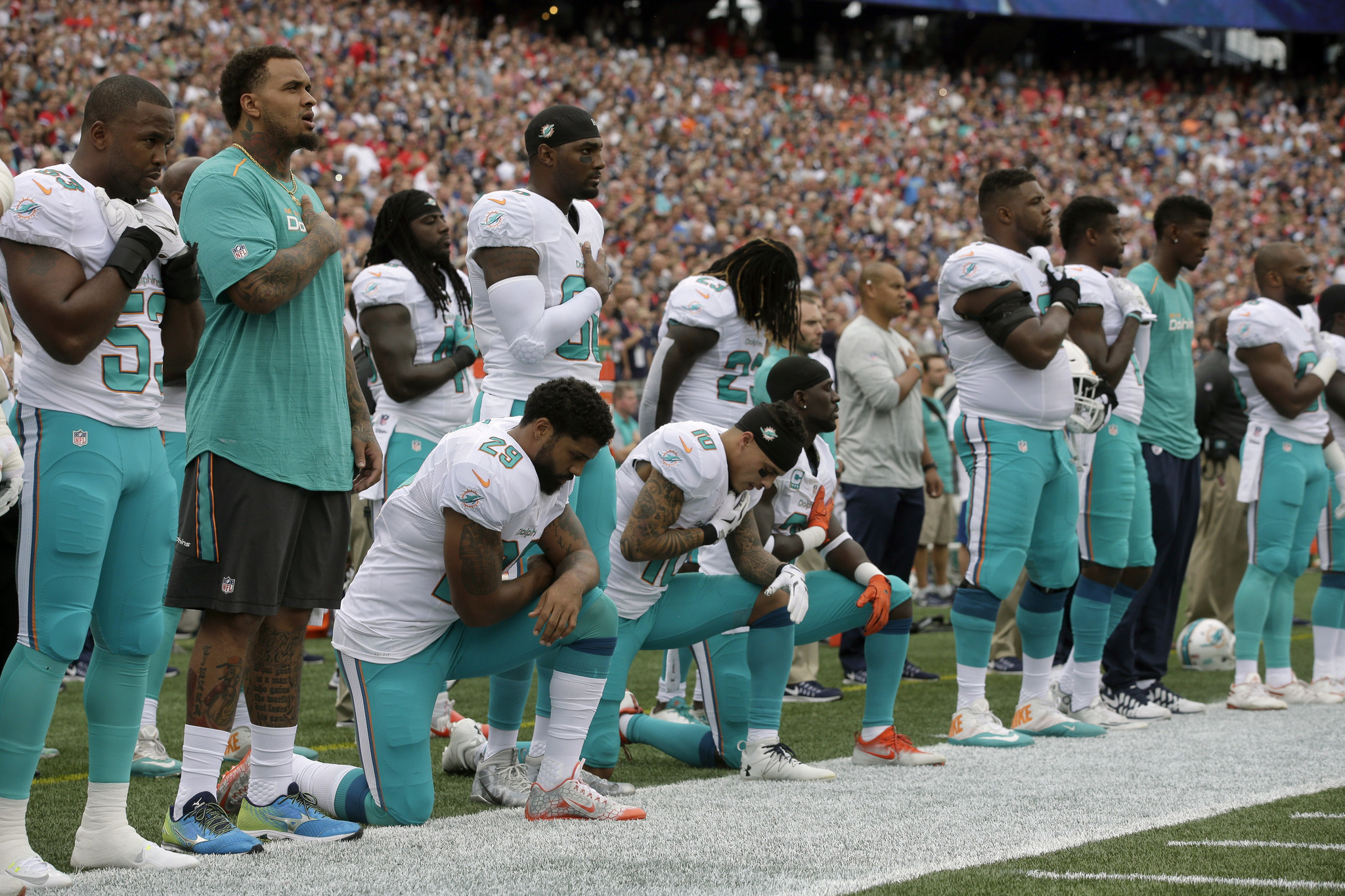 Players can stay in the locker room during “The Star-Spangled Banner,” but…..

EAST RUTHERFORD, N.J. (AP) — New coach Pat Shurmur wants the New York Giants to do the right thing when the national anthem is played before NFL games this season, and that could be a problem.

Under rules enacted by the league last week, players can stay in the locker room during “The Star-Spangled Banner,” but must stand if they are on the field. Teams will be fined for violations.

That puts Shurmur and the Giants in a difficult position.

While there were only a few players kneeling during the anthem at the end of last season, two are currently on the Giants’ roster. Star defensive end Olivier Vernon got down on one knee during every game last season. Safety Michael Thomas, signed in March as a free agent after five seasons in Miami, has gone down on a knee during the anthem much of the past two seasons to support the movement started by former 49ers quarterback Colin Kaepernick in 2016.

Even the all-powerful Pointing has no control about the blind texts it is an almost unorthographic life One day however a small line of blind text by the name of Lorem Ipsum decided to leave for the far World of Grammar. The Big Oxmox advised her not to do so, because there were thousands of bad Commas, wild Question Marks and devious Semikoli.

Shurmur said the Giants are going to let things settle before talking about the new rule as a team.

“I know certainly for me, it’s very easy,” Shurmur said Tuesday after a practice at an organized team activity. “I’m going to face the flag and take my cap off and listen to the anthem and be thankful that my family and I live in the greatest country in the world, and be able to kind of reflect on and be thankful for all the sacrifice that a lot of people have gone to, to help protect and secure our freedom.”

Vernon did not respond to several requests to appear for an interview after practice.

Thomas said he wanted to discuss the new rule with fellow players and Giants co-owner John Mara before commenting.

“I am not committing to anything right now,” Thomas said. “Just talking with my brothers and continuing to fight for our communities. Right now, we are not trying to jump the gun and step into anything.”

Thomas would not say whether the Giants talked to him about the national anthem before signing him.

The 28-year-old Thomas reiterated his protests have nothing to do with disrespecting the flag or servicemen.

“A lot of people try and make this about something else than what it is,” he said. “For me and my brothers, we know in our hearts why we are doing it and why we are taking this stance. We are not going to let it get distorted even if we have to find different methods and different ways to find a way to get our message across, then we are going to do that.

“I am not going to get emotionally hijacked about it right now, not going to make comments,” Thomas added. “Just keep doing what we have to do.”

Thomas played in 13 games last season with two starts. He will be given a chance to challenge Darian Thompson for the safety spot opposite Landon Collins, but he also is expected to be a force on special teams.

“It is very clear what they are thinking on special teams,” Thomas said. “I am excited to be a part of that. I don’t think having that low standard on special teams is going to be acceptable here.”

NOTES: DT Damon Harrison took part in practice for the first time in OTAs. … Collins, who had recent surgery on his right forearm, had a limited role in the practice. He wore a red non-contact jersey. … Neither WR Odell Beckham Jr., nor CB Janoris Jenkins was at the practice, which is voluntary. Both told Shurmur they would not be there. … Shurmur said Ereck Flowers is adjusting well to playing right tackle. He was moved there from left tackle after Nate Solder was signed as a free agent.