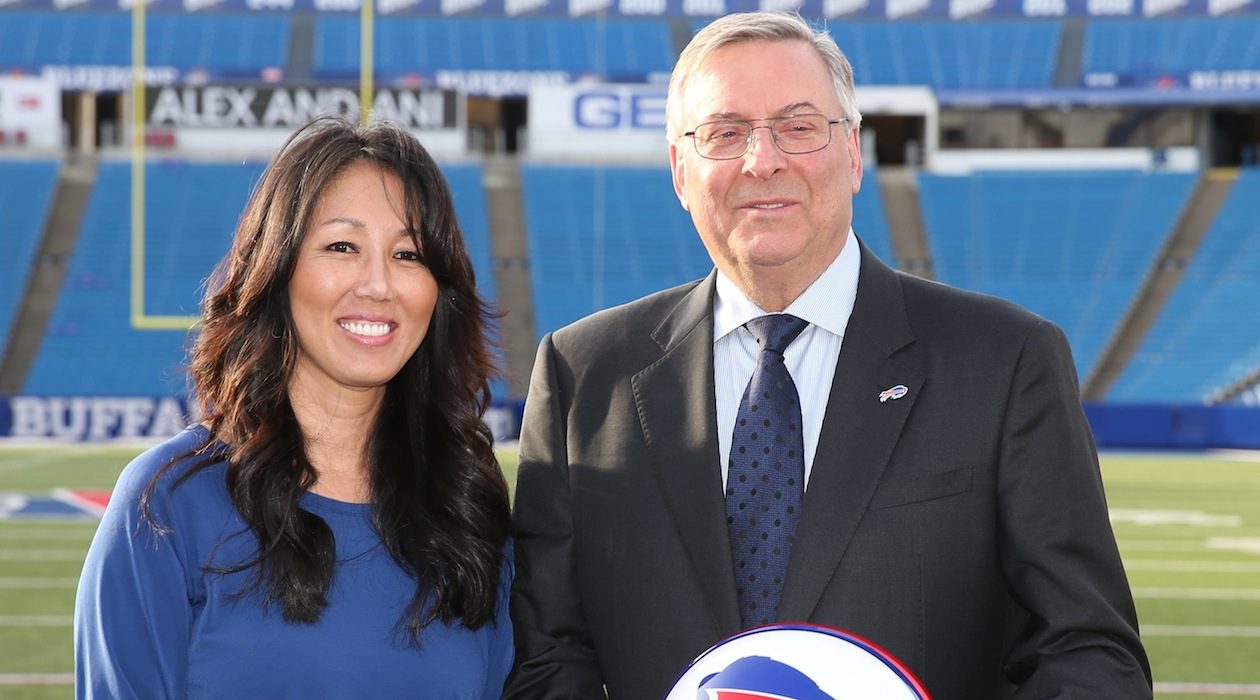 NFLThree years ago, while reporting a story about Martha Firestone Ford, I surveyed season-ticket holders in the stands at Detroit’s Ford Field. It had been a year and a half since her husband, William Clay Ford, Sr., died, making her the principal owner of the Detroit Lions. Ford had already made some tough decisions—notably the in-season firings of the GM and team president—and I was curious to hear what fans thought of her leadership so far.

“Martha,” one season-ticket holder said then, “is not a football girl.”

It was a thoughtless reply, considering this fan had no tangible information on just how much Ford knew about the game or running a business, or how that compared to what her husband had known. It was, instead, a reaction to her gender and the norm across professional sports—that most team owners are male.

In recent years, those numbers have shifted a bit in the NFL. Along with the Lions, a total of eight NFL clubs have women holding a primary ownership stake: Kim Pegula, Bills; Virginia Halas McCaskey, Bears; Dee Haslam, Browns; Gayle Benson, Saints; Denise DeBartolo York, 49ers; Amy Adams Strunk, Titans; and Carol Davis, Raiders. There are also several women who are part of ownership families who are actively involved in league business—among them are Katie Blackburn, EVP of the Bengals and daughter of Mike Brown; Charlotte Jones Anderson, Cowboys EVP and chief brand officer and daughter of Jerry; and Colts vice chair/owner Carlie Irsay-Gordon, daughter of Jim.

But if you were to rank the owners wielding the most power around the NFL, you would get pretty far down the list before getting to any of the women. There are a number of factors, including longevity (Benson just gained control when her husband, Tom, died in March); how active they choose to be (in the cases of McCaskey, York and Davis, their sons run the team); and sheer numbers.

“If you have X number of owners and only a fraction of X are women, then it’s a difference of percentage,” says Amy Trask, the former Raiders CEO. “It costs a lot of money to buy an NFL team. There are not a lot of people in the world who can afford to do so, and fewer women who can do so than men.”

The Family Ownership Dramas That Roil the NFL

There has also been the hurdle of women being viewed as influencers, rather than a spouse or a daughter, or a member of the support staff. In Trask’s book, You Negotiate Like A Girl, she recounts the owner of another team asking her to get him coffee when she walked into the room at her first league meeting. It was a mix-up, as he didn’t recognize her, but he was also surprised—the only other women in the room were part of the hotel catering staff.

That was some 30 years ago. In addition to the women holding ownership stakes, there are a number of high-ranking female executives around the league, including Chargers COO Jeanne Bonk and 49ers general counsel Hannah Gordon. Today, Trask believes the biggest difference in the room in strength of voices is not one of gender, but between team employees, like she was, and owners. When a person with an ownership stake speaks, it carries much more weight.

“If women who could write a check, like Oprah, bought an NFL team,” Trask says, “she could have as strong a voice as she wanted to have.”

Among the factors is being active in the room, which includes serving on the committees that help chart the league’s direction. Kim Pegula, who along with her husband, Terry, purchased the Bills in 2014, has quickly risen in league circles in this way—she sits on the business ventures committee, the Super Bowl & major events committee and the NFL Foundation Board. Pegula took former team president Russ Brandon’s spot on the 10-person business ventures committee earlier this year, after Brandon resigned from the Bills following what The Buffalo News reported was an internal investigation into allegations of his workplace misconduct.

“Her voice is one that people listen to,” Cardinals team president Michael Bidwill, who also serves on the business ventures committee, told The Buffalo News. “I think she comes from a perspective of making the league and all of our properties more fan friendly, so her input is greatly valued.”

Blackburn chairs the workplace diversity committee and the Super Bowl & major events committee, and sits on the CBA player benefit plans committee. Anderson is chairman of the NFL Foundation and, along with Dee Haslam, serves on the nine-member conduct committee. Irsay-Gordon is part of the digital media committee.

The club of NFL ownership is a far cry from a representative sample of the general public, given that you have to be born into the position or buy your way in. But Trask makes the point that we shouldn’t expect people in positions of power to only represent the perspective from which they come. “If one is suggesting that only women can articulate viewpoints that are important to women,” Trask says, “that’s akin to saying that women can’t articulate other viewpoints.”

But, it’s notable that while it once was a woman attending league meetings, it’s now women. As the next wave of leaders takes shape, there are a number of women positioned to grow in influence in NFL circles.

“As some of these women become the next generation of leaders,” Trask says, “they will have a strong voice, if they choose to do so.”