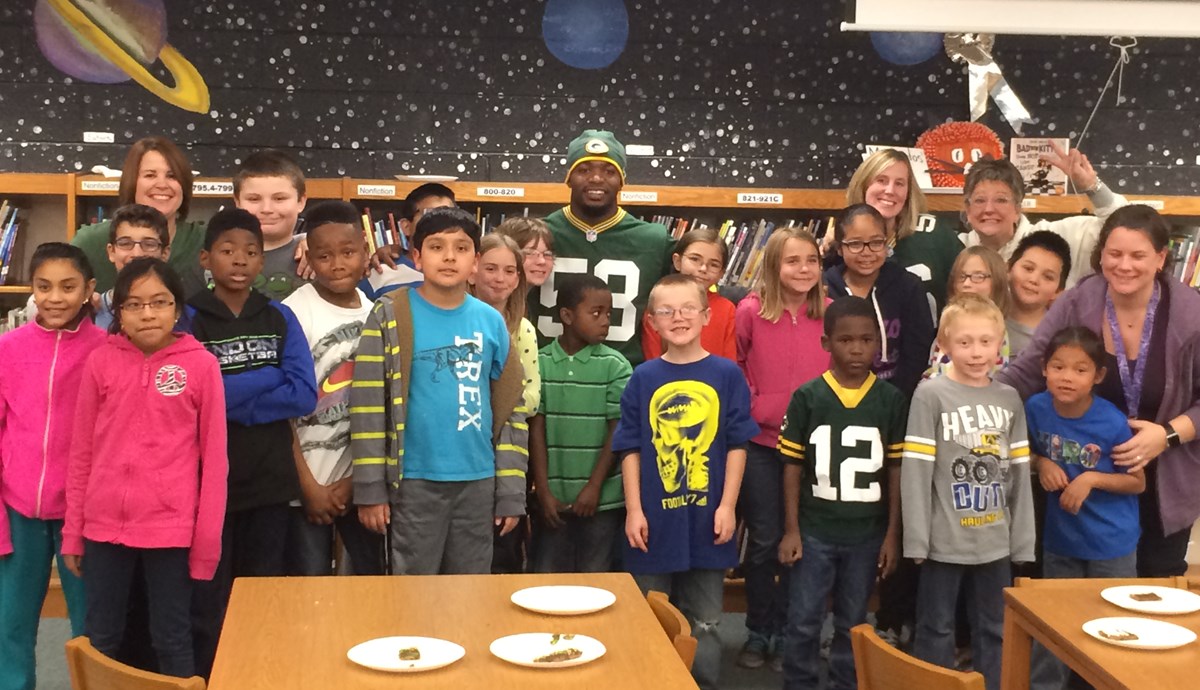 During National Volunteer Week, we celebrate volunteers who lend their time, talent, voice and support to causes they care about. Their stories inspire others to take action and discover their collective power to unite in making a difference. Points of Light is recognizing five NFL players with Daily Point of Light Awards; Competitors on the field, these players unite for a common cause as volunteers with the Van Duzer Foundation’s First Step program – acting as mentors and ambassadors of change. Meet honoree Sam Barrington, read his story and nominate an outstanding volunteer, family or organization as a Daily Point of Light.

“I volunteer because I care for future change. In 20 years I want to look back and see how much this world has changed, and know that I was a part of changing it,” said Sam Barrington, NFL linebacker – an unrestricted free agent who previously played three seasons with the Green Bay Packers.

Throughout his career, Sam has made time to give back to the community, receiving honors from the Green Bay Area Chamber of Commerce for his work with the NFL’s Play 60 program as well as the local Salvation Army, Big Brothers Big Sisters, and PALS chapters. He runs a free youth football camp in the summer, and in partnership with the Dreambuilders Foundation, he helps raise money and awareness for programs that benefit youth. He received the 2015 Walter Payton Man of the Year nomination for the Green Bay Packers, and in 2016 received the Pop Warner Humanitarian Award and a President’s Volunteer Service Award.

Most recently, Sam has become involved with the First Step Program – an initiative led by Daily Point of Light Award honoree Scott Van Duzer that gives kids and teens the opportunity to engage with community leaders on a regular basis, coming together for casual pick-up games, mentoring and small group discussions on community issues. Returning to his hometown of Jacksonville, Florida, Sam hosted a First Step event at Justina Road Elementary School Park. With 350 inner-city kids in attendance, he spoke to them about the importance of giving back to the community and reinforced the idea that anyone can volunteer.

“Leaders come in all shapes, forms, sizes, colors,” Sam told a group of children at a First Step event at King Middle School in Atlanta. “Anybody can be a leader, you just have to understand that it’s about doing things right – all of the time, not some of the time. And, you know, if you mess up one day, that’s okay. Do better tomorrow.”

Meet the other NFL players honored this week for their commitment to volunteerism and the First Step program: Jared Cook, Jonathan Meeks, Coty Sensabaugh and Michael Thomas.

You can help these Daily Point of Light honorees increase the impact of their work! The First Step program has pitched its creative solution to solving community needs to A Community Thrives, part of the USA Today network. Cast your vote to help First Step win a $100,000 grant to expand the program to neighborhoods across the United States. Vote today!